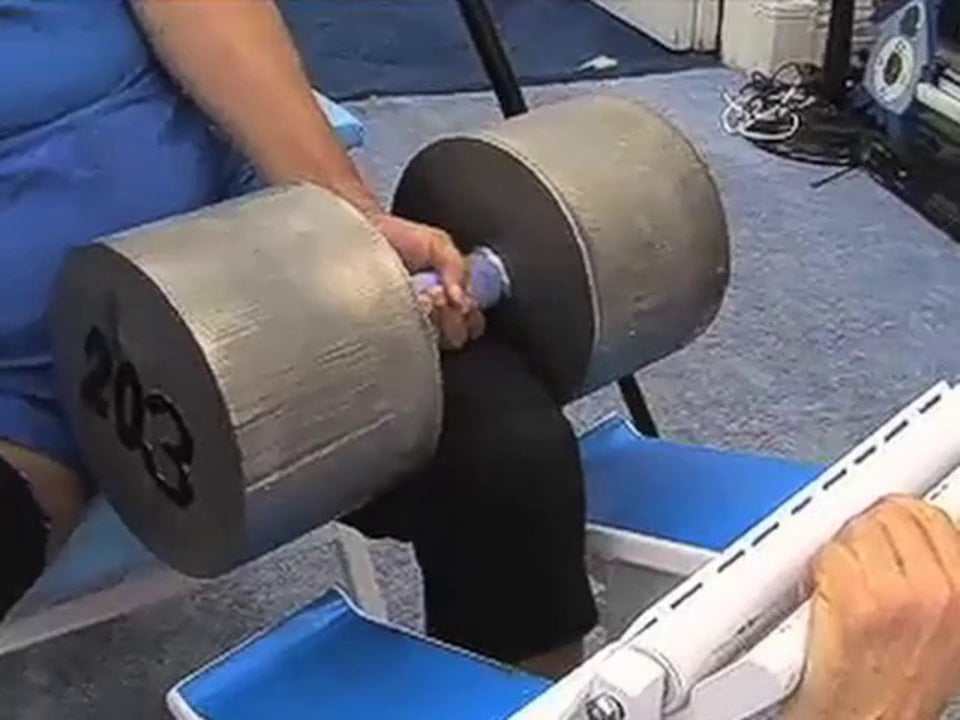 On the 20th of October, 2005, at the age of 74, Sri Chinmoy broke his own record by curling a 203 lb dumbbell ten times with both his right and left wrist.  Sri Chinmoy undertook lifts such as these to illustrate the possi- bilities of physical and spiritual self-transcendence, even in our advancing years.

Sri Chinmoy states: “You may wonder why I do such stupid things at the ripe old age of 74! My Inner Pilot, God, is my Inspiration. He is my Aspiration. He is my protector. I give Him all the credit.” Asked about his message to others, Sri Chinmoy says, “Never give up! Never give up! Physical fitness is of paramount importance. There is no age limit when we live in the heart and when we try to be of prayerful and soulful service to God in the heart of humanity.”

The dumbbell is so heavy that it takes two adult assistants just to place the weight on a cradle which is then lowered near Sri Chinmoy’s quadriceps. After the cradle is completely separated and far out of the way, he curls the entire weight with only his wrist muscles. Because the weight is so heavy, Sri Chinmoy feels that he taking a great risk with the 200 pound dumbbell. In the future, he will practise on a regular basis with 170 lbs.

Jim Smith, long-time Registrar of the British Amateur Weigh Lifters Association and an expert on lifting heavy weights exclaimed: “I am certain that nobody else in the world can do a wrist curl with a 200 pound dumbbell—no matter how old they are or how much they weigh! The strongest men in the world are seeing that a septuagenarian is curling with one arm much more than twice the weight that the world’s best body builders and weightlifters can curl with two arms.”

Five time Mr. Universe Bill Pearl and holder of the “Best Built Man of the 20th Century” title stated: In my more than 60 years in the fitness and bodybuilding field I have never heard of anyone in the world able to curl this huge amount of weight! This is a miracle to me!”

Bodybuilding’s top magazine, Muscle and Fitness, awarded Sri Chinmoy the second greatest feat of strength for any human being in the past year—lifting 200,873 pounds of weight in one evening at a New York event.

“The word impossible is only in the mind and not in the heart.”
– Sri Chinmoy

Sri Chinmoy went on to lift a 256lb Wrist Curl